Joe Slovo Township emerged as in informal settlement in the late 1990’s and only recently became more formalised by the Municipality with the first housing being built in 2003.

Population statistics are difficult to define.  As the township is rapidly growing due to the relocation of people from other areas of the NMBM, Sophakama currently estimates the Joe Slovo population to be approximately 68,000 people. 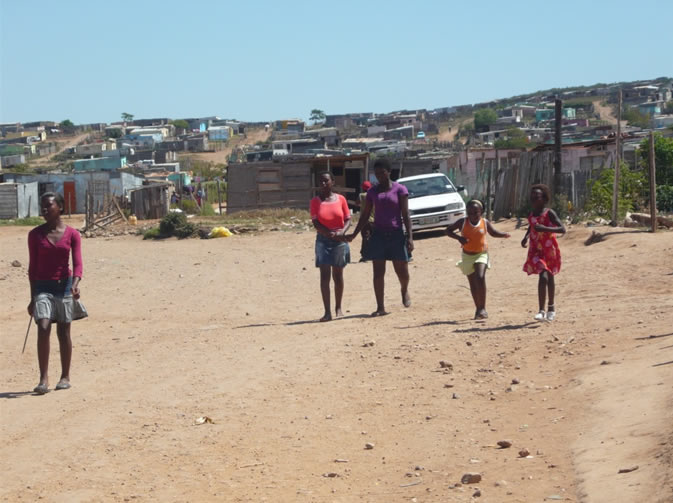 About 61% of the people in Joe Slovo are unemployed and the majority have low levels of education, making it more difficult to get permanent employment.  It was only towards the end of 2008 that the municipality began building RDP houses; the majority of the community is still living in shacks.  Water and sanitation is still a huge challenge.  Poverty and related social issues such as substance abuse and domestic violence associated with low socioeconomic communities are very much prevalent in Joe Slovo.

Only one school exists in Joe Slovo being the Joe Slovo Primary School.  The school is a dual medium junior secondary school which was established in 2003.  The school caters for learners from Grade R to 9 and currently has an enrollment of 1,156 learners in Grades 1 to 7 and a further 100 in Grade R, with approximately 23 educators. No other schools exist and no day care centres exist beyond a few unregistered home based crèches in the area.

Community services and resources are limited with the exception of the Joe Slovo Clinic which was established in May 2008 and offers Primary Health Care Services such as immunization, family planning, chronic medicines, TB and HIV/Aids testing and treatment.  The clinic currently has approximately 5,000 visits per month.

Health estimates indicate high rates of HIV infection in this community (estimated to be higher than the official data of Antenatal client first test positive rate 19.6% in Eastern Cape).  High rates of infection of Tuberculosis (TB) and Sexually Transmitted Infections (STIs) also remain a challenge for this community.

Very few community based organisations exist in this area.  A Joe Slovo Clinic Committee was constituted in 2010 and does have representatives from various community sectors including women, disabled, traditional healers, municipal councillor, religious groups and NGO’s.  A number of churches and religious groups exist in Joe Slovo.

Joe Slovo remains one of the poorest and worst affected townships in the Nelson Mandela Metropolitan area with regards to all indicators on social and health issues including high unemployment, high HIV, TB and STI prevalence and increasing numbers of AIDS orphans.  Poor service delivery and access to services further compounds these challenges.

Developed by Bizit Hosted By Boost